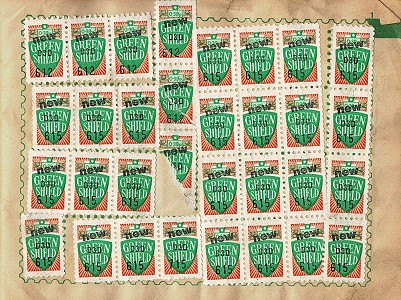 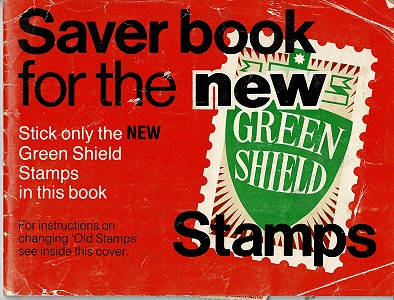 A few weeks ago, a book of Green Shield Stamps was kindly donated to the museum by Mrs Caroline Lewis.

Although many of us can remember the time when Green Shield Stamps were widely advertised and distributed by petrol stations and other retailers, they have now passed into history.

The British sales promotion scheme “Green Shield Stamps” was introduced in 1958 to reward shoppers with stamps that could be stuck into a book and exchanged for goods chosen from a catalogue.  Generally, one stamp was given for each 6d (2½ new pence) spent on goods, so that large numbers of stamps were stuck into the books.  When enough stamps had been collected, they could be exchanged for a range of gifts collected from a Catalogue Shop.

Tesco founder Jack Cohen was an advocate of Green Shield Stamps, and Tesco became one of the company’s largest clients.  But in 1977 Tesco made the decision to abandon Green Shield stamps, and instead focussed on price reductions in its stores.

With high levels of inflation in the 1970s goods became more expensive and a larger value Green Shield Stamp was issued which was worth eight times the original stamp.  Our image shows these “New” stamps.  In 1987, two books full of new stamps could be exchanged for a small cassette player, or 20 books for a camera.