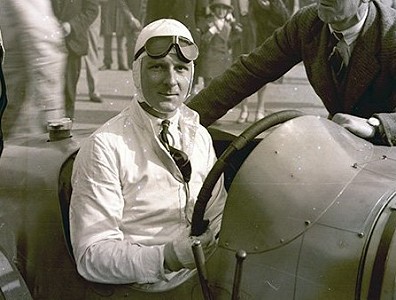 Louth War Memorial lists Second Lieutenant Geoffrey Staniland of the Lincolnshire Regiment who was killed in action in Belgium the First World War, but there is no mention of his son Christopher who was killed during the Second World War as he was not on active service.

The Stanilands lived at Abbey House, Louth Park.  Geoffrey was a solicitor in the Louth firm of Allison and Staniland.  Christopher, born in 1905, attended King Edward VI Grammar School and joined the Royal Air Force in 1924.  In 1930 in joined the Fairey Aviation Company as a test pilot, and on 21 March 1933 he flew the first prototype of the Fairey Swordfish, an aircraft that was later to achieve fame for its part in sinking the German battleship “Bismark”.

Christopher also had a love of motor sport and became a renowned racing driver winning a number of both car and motorcycle races between 1924 and 1938.  In 1931 he drove an MG Midget along with Freddie Richmond, son of the Duke of Richmond, and won the Brooklands Double Twelve race.  In 1932 and 1933 he partnered with Malcolm Campbell in a number of races and in 1935 he was one of the drivers of the car “Speed of the Wind” at the 24-hour endurance land-speed record race at the Utah Bonneville salt flats which was won shortly after Campbell won the land speed record with his car “Blue Bird”.

Christopher was only 36 years old when on 26 June 1942 he was killed in an accident.  His aircraft, a prototype Fairey Firefly, took off from Harmondsworth aerodrome, now Heathrow Airport, and broke up in mid-air during a dive, and crashed at Sindlesham Mill in Berkshire.  He is buried in Keddington churchyard along with his mother who resided at Abbey House until her death in 1949.