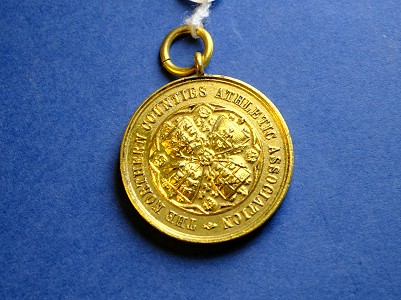 One of Lionel's medals 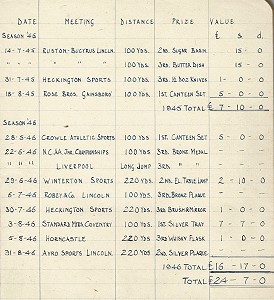 Lionel Bohn [pronounced ‘Bonn’] was a Louth sportsperson who kept a hand-written record of the prizes he won, and their value, over nearly 20 years of competitions.

As well as competing in nearby locations such as Grimsby, Horncastle and Scunthorpe, several of Lionel’s competitions were in mining towns such as Beighton (near Sheffield), Chesterfield, or connected with a manufacturing firm – Ruston Bucyrus in Lincoln, or Standard Motors in Coventry.  He took part in the Northern Counties AAA Championships twice, in 1946 and 1954.  Lionel would have been running on cinder or grass tracks.

Not a lot is known about Lionel.  He was born in Boston, the only child of Frederick and Jenny Bohn; Frederick was of German origin.  The family moved to Louth when Frederick became manager of the Lin Can canning factory in Charles Street.  They lived in Horncastle Road, and Lionel remained there until his death in 2003.

Lionel’s Record Book and some of his plaques and medals are now on display in the Town Gallery of Louth Museum.