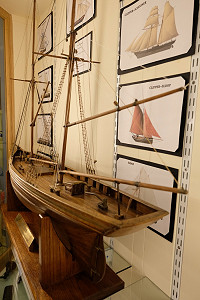 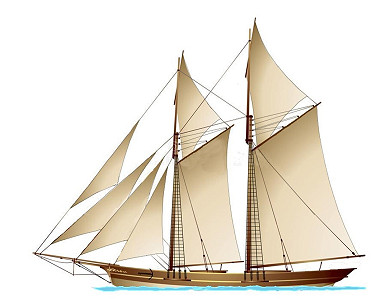 Drawing of a schooner

This large model boat unearthed from the museum’s store has been repaired and is on display in the Town Gallery of Louth Museum.  It is a Schooner named Elizabeth.  Both the model and the actual vessel were constructed by Louth shipwright Thomas Wray.  We know from a report in the Stamford Mercury newspaper that the Elizabeth was launched from Louth Riverhead in July 1845.  She sailed to numerous ports, including Grimsby, Hull, Goole, Blyth, Newcastle, London, Plymouth and Antwerp.  Compared with other schooners, the Elizabeth was relatively small, because she had to pass through the locks along Louth Canal.

It is thought that Wray built the scale model for John Harvey who commissioned the schooner, to show him what the vessel would look like.

If you are wondering what is the difference between a schooner and other types of vessel look at the masts and the sails.  A schooner has both fore-and-aft rigged sails on all of two or more masts and, in the case of a two-masted schooner; the foremast is shorter than the mainmast.

We thank Stuart Sizer for restoring the rigging on the model boat, and for sharing with us his unsurpassable knowledge of Louth Navigation and Louth-made boats.  We thank Andy Cooper and his team for constructing the display stand for the boat, and for supporting the museum in so many ways.