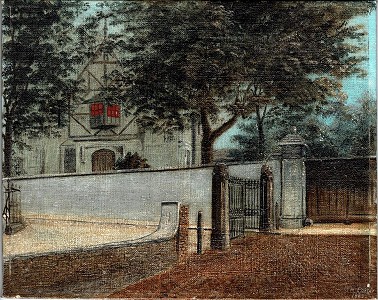 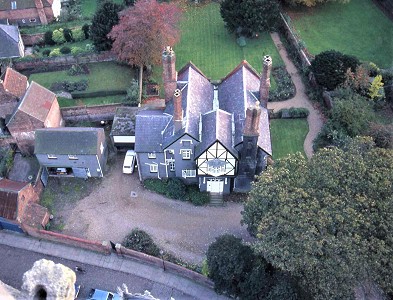 This small oil painting, dated 1883, is one of the many items donated to Louth Museum by the late David Robinson.  It depicts the rectory as seen from the western end of St James’ Church, Louth.  At the time of the painting, the rectory was new, having been built in 1882 to replace a much older house.  The Rector was Rev Albert Sydney Wilde.

Today, 139 years later, this view is instantly recognisable.  The Tudor Gothic rectory with its triangular oriel window is a listed building.  The church gateposts and pedestrian entrance have been modified, but the wall of the rectory garden is unaltered except for its superficial surface, and the tree at the centre of the painting, with its distinctive branched trunk, is still there!

In a corner of the painting is the inscription ‘G H PORTER 1883’.  George Henry Porter was the organist at St James’ Church for more than 30 years (1866-98).  He was also Provincial Grand Organist of Lincolnshire, a teacher of music, conductor of Louth Choral Society, and an enthusiastic Freemason.  His obituary in the Stamford Mercury newspaper of 19 Dec 1902 mentions that he was a "clever artist".

The whole rectory building can be seen much more clearly in the second image, a 1982 photo by Ken James.