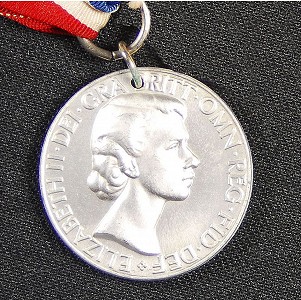 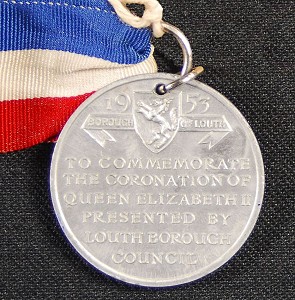 On 6 February 2022, Her Majesty Queen Elizabeth II became the first British Monarch to celebrate a Platinum Jubilee after 70 years of service.  To celebrate this, we have Bank Holidays on Thursday 2 and Friday 3 June this year.

Pictured here is a Coronation Medal which, in 1953, was given by Louth Borough Council to every child in a secondary school in Louth, along with a copy of the New Testament of the Bible.

As far as I am aware Her Majesty has not been to Louth, though she has several times visited Grimsby, Scunthorpe, Lincoln and other parts of the County.  However, the Grimsby Telegraph archives record that during the Royal Visit to Scunthorpe in 2002, world champion sausage producer Chris Fenwick of Louth presented Jubilee sausages to the Queen on the platform of Scunthorpe Rail Station.

Like the vast majority of the population, Queen Elizabeth has reigned for the whole of my life; only about 15% of the current British population were born before she became Queen.  In contrast, there have been 14 prime ministers since 1952.