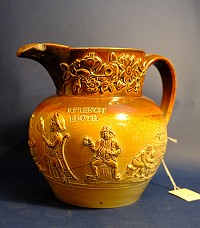 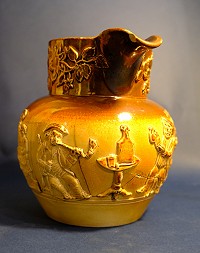 This attractive jug, decorated with figures enjoying themselves in the alehouse, has been donated to the museum by Mr and Mrs Edwards from Nottinghamshire.

The jug has the inscription, “J French Louth”.  James French was the landlord of the Packhorse Inn in Louth’s Eastgate in the early 19th century, from at least 1922 until his untimely death in February 1836 at the age of 39.  James’ widow, Elizabeth, left with two young daughters, continued to run the inn until the 1850s.

We know from the rate books, that James and Elizabeth French not only ran, but also owned the inn.  It was a substantial business concern.  In 1823, the property was described as “Packhorse Inn, stables, yard, garden, additional rooms, granary &c”.  James and Elizabeth also owned four small cottages (probably in the yard of the inn) and two houses adjoining the inn.

Like many of the larger public houses with yards, the Packhorse was an operational base for carriers’ carts, which formed a vital link between Louth and the surrounding communities.  In the 1850s, carriers using the Packhorse yard served Binbrook and Market Rasen.

Newspaper reports show that in the 19th century, the Packhorse Inn was a popular venue for commercial auctions, particularly for sales of properties in outlying villages.

A report in the Lincolnshire Chronicle newspaper of 15 February 1839 states, “Louth Choral Society held its annual meeting at the Packhorse Inn on Monday last.  After partaking of a sumptuous repast, Non Nobis Domine was sung by Messrs M and R Hubbard etc.  The president of the society took the chair; several toasts were drunk, and the excellent singing rendered the evening a very pleasant one.”

Today, approximately 200 years after James French took on the Packhorse Inn, it now is described as a restored 18th-century pub featuring karaoke nights and live music, and providing B&B with full English breakfast.