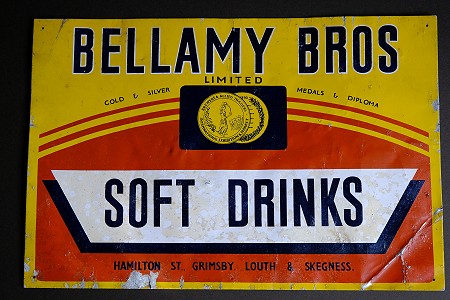 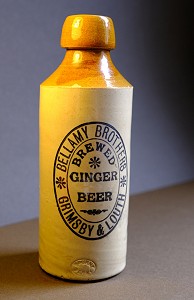 This eye-catching sign advertised Bellamy’s soft drinks.  Enamel signs were the first permanent form of advertising poster, durable and easily washable.  Enamelling is the application of a thin coat of finely-ground glass to a metal, and then heating so the glass melts and fuses to the metal.  Its use was widespread, including advertising, railway signs, street name plates and clock dials.  Large-scale production of enamel signs began in 1886.

Bellamy Brothers was a substantial business, based in Grimsby and Louth, and with depots in Skegness and Horncastle.  It was initiated by Horncastle-born John Adlard Bromhead Bellamy, who moved to Louth and in 1872 was a grocer in Chequergate.  He relocated to Grimsby where he and his two sons, John Jr and William, set up a business manufacturing mineral water and ginger beer, “J B Bellamy & Sons”.

A partnership between the brothers (John Jr and William) and provision merchant Charles Cuthbert of Louth, led to a branch being established in Louth’s Upgate, in the location still known as Bellamy’s Yard.  From 1892 until 1894 when the partnership with Cuthbert ended, the business was “Bellamy Brothers and Cuthbert”.  It afterwards became “Bellamy Brothers”.  John Jr and William lived in Cleethorpes, but their sister Mary lived on the Upgate site where her husband William Salisbury was the manager.

Bottled drinks were produced in Bellamy’s Upgate works until the mid-20th century.  Like many other local businesses, Bellamy’s merged with larger companies and disappeared; in the 1980s, Bellamy’s Soft Drinks merged into Mandora, and this subsequently became part of A G Barr plc, based near Glasgow.