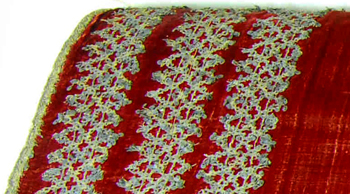 Sequinned bedcover given to Sir John

Sir John Bolle (d.1606) of Thorpe Hall, Louth was knighted at the Siege of Cadiz in 1596 where a high-born Spanish lady fell in love with him and gave him gifts including a portrait of herself in a green dress.

Sir John Bolle, born about 1560, lived at Haugh near Alford before building and moving to Thorpe Hall, a large mansion in magnificent grounds on the western side of Louth.

In 1596 John Bolle and Sir Walter Raleigh were part of an English expedition to Spain, and afterwards Captain John Bolle was knighted for his valiant services at the Siege of Cadiz.

In Louth he is best remembered for the romantic aspects of this journey: while in Spain he was put in charge of a prisoner, a high-born Spanish damsel, Donna Leonora Oviedo. Described as “lovely, young and tender”, Bolle treated her with chivalrous courtesy. Donna Leonora fell in love with Bolle, and when she was freed from captivity she confessed her love and begged him to not leave her. He did not respond to her amorous advances, but told her he had a wife in far-off Lincolnshire. The Spanish lady’s hopes were dashed but the quality of her love was noble, and she appreciated his loyalty to his wife. She sent him home with an ornate wooden chest filled with gold, jewels, a bed, a splendid bedcover and a portrait of herself in a green dress, presents intended for Sir John’s wife in Louth; Donna Leonora decided to spend the rest of her days in a nunnery.

Sir John died in 1606 aged 44, and was buried at Haugh where an impressive alabaster monument was erected in St Leonard's church. The Bolle family continued to live in Thorpe Hall until the 18th century, and the Bolle coat-of-arms can be seen on the Thorpe Hall Dovecote. It is said that the ghost of the Green Lady, Donna Leonora Oviedo, appears at Thorpe Hall and on the road outside.