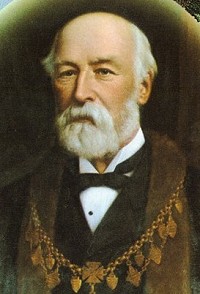 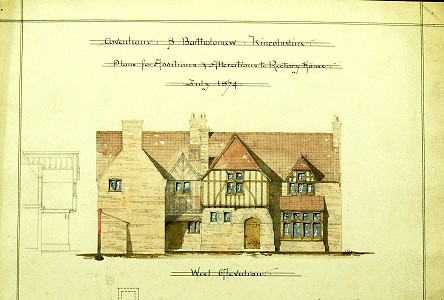 Plans for alterations to Covenham Rectory

James Fowler (1828-1892), prolific Louth architect who designed or restored 240 buildings including churches, parsonages, schools and almshouses, and was five times Mayor of Louth.

James Fowler was a Victorian architect who lived in Louth. Best known for his work restoring and building Anglican churches, he also designed houses (mainly rectories and vicarages), schools, alms-houses and other buildings.

James Fowler was born in Lichfield, Staffordshire in 1828. In 1849 when he was twenty, he moved to Louth and worked on the House of Correction (the prison). In 1851 Fowler entered into partnership with Joseph Maughan, but in 1859 set up his own architect’s practice in Upgate. Later he lived in Gospelgate, moving in 1869 into a handsome Georgian house in Westgate which he extended with substantial bay windows.

Fowler undertook an enormous amount of work, designing or restoring more than two hundred buildings, mostly in Lincolnshire but several outside the county, including some in London. He was Diocesan Surveyor for Lincolnshire from 1871 to 1886.

His style was distinctive, with buildings featuring several colours of brick and with characteristic pointed windows. This style satisfied the 19th century desire in the Church of England for a more “catholic” style of worship and buildings, and returning to the English Decorated style, of the 13th and 14th centuries.

You can see several examples of Fowler’s work in Louth today, including St Michael’s Church in Church Street, Louth Grammar School (now the school studio) in Schoolhouse Lane, the Bedehouses in Gospelgate, Louth Hospital (now part of the grammar school) in Crowtree Lane, and the Orme Almshouses in Eastgate.

Although there are many admirers of Fowler’s work, he has also been criticised for over-restoration of churches and destroying too much of the original architecture.

James Fowler and his wife had three children although two died at a young age. He was Mayor of Louth five times. In his later life he suffered from diabetes, and he died in Louth in 1892 at the age of 63. His surviving son Richard continued his architectural practice for some years.

In addition to the large numbers of his buildings that still stand in Louth and the surrounding villages, Fowler is commemorated by a Blue Plaque on his Westgate home and an alabaster wall plaque in St James's church where there is also a carving of his head on the armrest of a choir-stall.

James Fowler was an immensely respected member of his community, undertaking many roles. He served organisations as varied as Louth Penny Bank, Louth Tennis Club and Louth National Schools. He was also President of the society that operates Louth Museum. Therefore our Society led a year of commemorative events in 1992, the centenary of his death. His gravestone in Louth Cemetery was restored, a major exhibition of his work was put up and the Society published a book about him, “Fowler of Louth” - a reference to John Betjeman's poem which mentions him. One of our members, David Kaye, wrote a play about Fowler's life; David played the part of Fowler, growing an impressive beard and looking amazingly like him!

In Louth Museum we are fortunate to have several original drawings and plans by James Fowler, as well as documents about him.