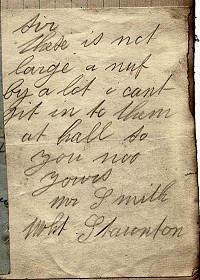 In the late 19th century and early 20th century, William Pridmore had a tailor’s shop in Eastgate, Louth (it is now part of Luck of Louth). Goods were sent out by carrier’s cart, and if necessary returned with a note. William had come from London, and must have been bemused by the literary style of ordinary Lincolnshire people. He compiled a scrapbook of notes he received, and they give a fascinating view of a bygone era. One such note is shown.

“East Barkwith. Sir I am sending two shilling I will send two more another fornight don trouble to send bill till I pay it all don leave any bill at Mr Holmes”.

Ralph Pridmore took over his father’s business, and when he retired he gave the scrapbook to David Robinson; it is now in Louth Museum where it can be viewed on the monthly Open Library days.