Poem Composed in Louth’s House of Correction by ‘Henry Friday 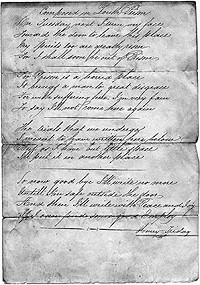 In August 2012 Louth Museum was given copies of various documents dating from the mid-19th Century. One of these was highly intriguing - a poem entitled “Composed in Louth Prison” and signed Henry Friday:

“On Tuesday next I turn my face
Toward the door to leave this place
My spirits too are greatly risen
For I shall soon be out of Prison
For Prison is a horrid place
It brings a man to great disgrace
For with suffering here, I’m very fain
To say I’ll not come here again
The trials we undergo
I meant to have written here below
But as I have little space
I’ll put it in another place
So now good bye I’ll write no more
Until I’m safe outside the door
And then I’ll write with Peace and Joy
If I can find some good employ”

From contemporary newspapers we managed to find some facts about Henry Friday and his association with Louth Prison. On 26th October 1857, two vagrants were committed to Louth’s House of Correction for one month for begging in the village of Clee, now Cleethorpes. The names they gave to the authorities were Robinson Crusoe and Henry Friday, clearly fictitious names taken from the 18th Century novel by Daniel Defoe.

In December of that year, the same two vagrants were again committed to the House of Correction in Louth for three months (with hard labour) by the Grimsby County Magistrates, after pleading guilty to cutting off the manes and tails of twelve horses belonging to a Mr Bingham of East Ravendale and three horses belonging to a Mr Iles of Binbrook. Friday and Crusoe had sold the horse hair to a local marine store dealer in Thoresby who had become suspicious of how the men had obtained the horse hair and who had alerted the authorities.

Whilst he was incarcerated in the House of Correction for the second time Henry Friday composed the poem. It seems likely that after his release from prison Henry Friday either gave a written copy of the poem, or more likely recited it to Richard Hubbard of Louth; it was Hubbard’s descendants who kept the poem for more than 150 years and gave a copy to Louth Museum.

After their release for the second time from Louth’s House of Correction both Henry Friday and Robinson Crusoe disappeared from all records and no further trace of them has ever been found!