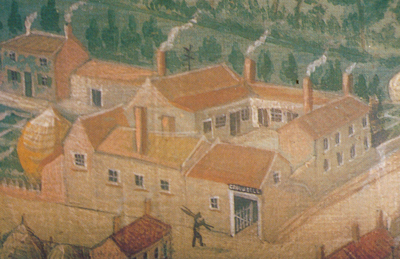 For more than a hundred years, from the 1820s to the 1930s, agricultural implements were made by the Grounsell family in Louth. There were three generations: William, Frederick and Harry Grounsell.

William Grounsell, who came from Hull sometime before 1830, had a yard in Westgate, on the western side of what is today known as “Irish Hill”. In 1838 he won a prize from the Lincolnshire Agricultural Society:

“Mr William Grounsel of Louth an improved ridge drill, to sow 2 rows at once, and dust plant with lime when attacked by the fly.”

According to Richard Gurnham a local historian and author:

“In the 1830s and 1840s most farmers still preferred to sow broadcast or to dibble their corn with the aid of children who dropped the seeds in the holes made by a three-pronged dibbler. Labour was cheap and neither farmers nor labourers were keen to see it displaced by expensive machinery.”

However, newspaper reports of 1842 and 1843 suggest that William Grounsell’s business suffered financial problems. The business premises were advertised as vacant in 1857 and William died in 1859.

William’s son Frederick Grounsell, who had been working as an iron moulder in Mansfield in 1861, returned to Louth by 1871. Frederick’s business as an “Implement Maker” was based in Northgate, in the area which is now the Co-op shop and car park. It became known as Northgate Iron Works.

“For many agricultural implement makers it was only in the 1850s and 1860s that demand for their products and skills was sufficient to really make it possible for such businesses to thrive and expand.”

Harry Grounsell, Frederick’s son, joined his father in the business which was known as “F Grounsell & Son”, even after the death of Frederick in 1916. In addition to the site in Northgate, showrooms were acquired near the Cattle Market.

Contemporary newspapers have many references to the Grounsell’s. A typical example dated 14th April 1905 is:

After Harry Grounsell died in 1938 the Northgate Iron Works were taken over first by J Morton, Son & Lock, and later by Burgesses.