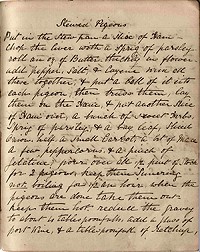 The recipe for Stewed Pigeons

Louth Museum has recently been given an exercise book which contains handwritten details of the murder of a young Louth woman in 1875. Louisa Hodgson was murdered by her jealous boyfriend, Peter Blanchard, who was subsequently tried and executed in Lincoln Jail.

Twenty-two-year-old Louisa and her family lived in Louth's Newmarket – her father was a maker of agricultural implements. The book seems to have been started by Louisa's family to record details of her murder and the fate of Blanchard. Later, poetry was added, and the back of the book was used for recipes.

One such recipe is for Stewed Pigeons:

Put in the stew pan a slice of ham.

Chop the liver with a sprig of parsley. Roll an ounce of butter thickly in flour. Add pepper, salt and cayenne. Mix all these together, and put a ball of it into each pigeon.

Then truss them, lay them on the ham, and put another slice of ham over a bunch of herbs, sprig of parsley and a bay leaf, sliced onion, half a small carrot, a bit of mace, a few peppercorns and a pinch of gelatine.

Pour over all ½ pint of stock for two pigeons. Keep them simmering not boiling for ½ an hour. When the pigeons are done take them out. Keep them hot.