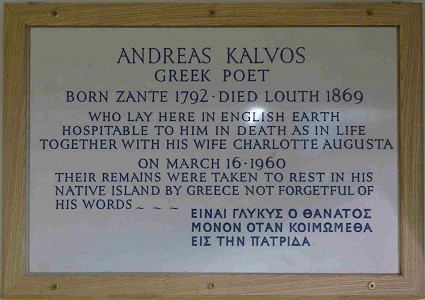 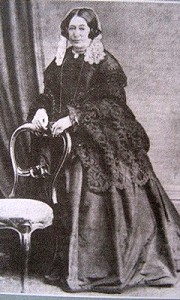 On Saturday 21 June 2014 at Louth Museum, Louth Naturalists’, Antiquarian & Literary Society and the Hellenic Foundation for Culture in the United Kingdom celebrated a famous, yet forgotten, Ludensian: the Greek National poet Andreas Kalvos (1792-1869), who, after a life full of adventures, chose to spend the last years of his life in Louth, assisting his wife Charlotte with the running of a school for young ladies at High Holme.

The Greek poet, philosopher and translator Andreas Kalvos was born in 1792 on the island of Zakynthos (also known as Zante). Having lived in Italy, Switzerland and England, in 1824 he moved to Corfu where, for over 26 years, he taught philosophy and languages both at the Ionian Academy, the first Greek University, and privately. In 1852 he returned to England and married Charlotte Augusta Wadams, a teacher he had met while she was in charge of the girls' school in Corfu.

From 1857 to 1865 the couple ran a girls' school in fashionable Maida Vale, West London. For reasons which research has yet to discover, in late 1865 they moved to Louth and in March 1866 Charlotte Kalvos took over a school for girls which she ran from 10 Holmes Lane in High Holme.

Kalvos died in 1869 and Charlotte in 1888. They were both buried in the graveyard of St Margaret's Church, Keddington. In 1960 their remains were exhumed from St Margaret’s Church and repatriated to Kalvos’ native Zante, where they were laid to rest with great ceremony. Another moving ceremony took place at St. Margaret's in August 1960, when the then Greek Ambassador and Nobel Laureate poet George Seferis bequeathed a commemorative plaque to the Church.

In May 1961, J W White, a former Curator of Louth Museum, was awarded the Golden Cross of the Greek Order of the Phoenix for his “most valuable contribution in discovering precious information on the life of the national Greek poet Andreas Kalvos”.

The commemorative plaque from St. Margaret’s Church now has a permanent home in Louth Museum - it was unveiled on 21 June 2014 at a ceremony organised in cooperation with the Hellenic Foundation for Culture.

The Kalvos Memorial at St Margaret’s Keddington has been restored and is now situated close to the gate of the public footpath through the Churchyard for all to see.

No known photograph or portrait of Andreas Kalvos exists, and this is where you can help and win a case of Greek wine!

Can you help us find Charlotte’s "missing" husband Andreas?

The lady in the picture is Charlotte Kalvos and this photograph was taken by renowned Louth photographer Plumtree of Ramsgate sometime between 1865 and 1870.

Do you have any old family albums which may contain photos of Charlotte and Andreas? Or old photographs tucked away – do you recognise Charlotte in them? Please look in your family albums, and if you can identify Charlotte then the chances are, one of the men in the picture could be Andreas Kalvos!

Send us the group picture including Charlotte and win a case of Greek wine!

The email address for pictures: events@greeceinbritain.org.uk