Percy Wolfe - a World War I Soldier from Louth 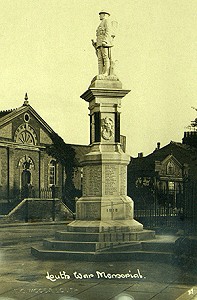 We recently had a query from Grayscroft Coaches, who for the last 20 years have been visiting Essex Farm Cemetery in Belgium with school groups. They found that one of the casualties buried there was Percy Wolfe of Louth, and they asked if we could find out the story of this man who died in Flanders on 23rd December 1916.

By looking into the records we did indeed find out about Percy, an ordinary citizen who died for his country.

Percy Wolfe was born in Louth in 1879. His parents were Beecher Wolfe and his wife Susanna. Beecher was originally from Hull, and Susanna was a local girl, the daughter Rebecca and Charles Riggall who lived in Northgate – Charles was a tanner and then a farm journeyman. The Riggall family lived in Northgate in 1851 and in Spout Yard in 1861 and 1871.

Beecher and Susanna Wolfe had married in 1872. By 1881 they had six children – Percy was the fifth – and they were living at 46 Newmarket. Beecher was working as a “Roper”, presumably making ropes in one of the rope factories in Louth.

By 1891 the family had moved to Grays Road near Broadbank. Percy’s father Beecher and his younger brother Ronald had died and his widowed mother Susanna was working as Seamstress, Percy’s sister was in service and two of his brothers were employed.

But a couple of years later in 1893, Percy’s mother also died – she was only 42 years old. Teenage Percy now an orphan moved to London, where the 1901 and 1911 censuses show he was a grocer’s assistant.

Military records show that Percy enlisted in Croydon, in the 17th Battalion of the Sherwood Foresters.

However, Percy’s connection with Louth had not ceased and he was not forgotten here. Herbert Wolfe, one of Percy’s brothers, became a confectioner, and had a shop in Upgate. Private Percy Wolfe was killed in action at Ypres in December 1916, and is commemorated both on Louth War Memorial and in London Road Cemetery.

The photograph of Louth War Memorial was probably taken in the early 1920s as it does not bear the shields recording the names of those who were killed during the World War II.