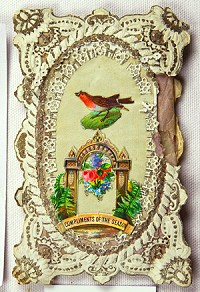 Noticeably different from today’s Christmas cards, this once-elegant Victorian card dates from about 1870 is in Louth Museum. It has an elaborate embossed paper frame surrounding a white silk picture of a robin above an arch, with posy of flowers. The ribbon bears the greeting “Compliments of the Season”.

Christmas cards began to be sold in shops in about 1862, and after the halfpenny post started in 1870 they became an established part of the seasonal festivities. Early cards were merely decorated visiting cards, but it became fashionable to mount cards in albums, and the picture became all important.