School books have changed dramatically over the years 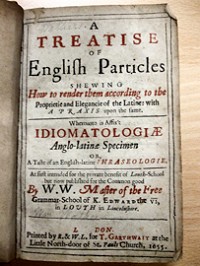 In the 17th Century William Walker who was the Master at Louth Grammar School, produced a book on English-Latin Grammar. It is a guide to translating English into Latin, a procedure which seemed to form the basis of the school curriculum at that time.

Walker’s book was entitled “A Treatise of English particles Shewing How to render Them According to the Proprietie and Elegancie of the Latine: with a Praxis upon the same”. Although initially intended for pupils in Louth, the book became popular throughout England and several editions were produced. In Louth Museum library we have a copy of the 1655 edition.

It is interesting to see this book, but I am thankful that our educational system has moved on substantially!