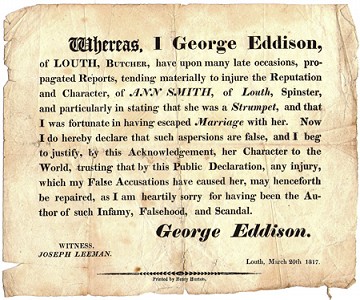 Some items in Louth Museum just grab your attention and this is one of them! It is a public declaration made in 1817 by middle-aged George Eddison (born 1767, died 1827) who was a butcher in Upgate.

Mr Eddison felt he needed to explain his relationship with young Ann Smith who, the declaration suggests, might have been supplementing her income by prostitution. We know very little about Ann Smith, but almost 20 years later on 30th October 1835 the Stamford Mercury newspaper reported, “Ann Smith a notorious prostitute, was found guilty of stealing a pocket-book containing a £5 note from the person of David Fowler, at Horncastle Fair, and sentenced to seven years' transportation. She thanked the magistrates for her sentence.” However, a week later a correction was printed, “In the report of Lindsey Sessions last week, the sentence against Ann Smith for robbery at Horncastle should have been printed 6 months' imprisonment, instead of 7 years' transportation”.

Interestingly an official witness is named on Mr Eddison’s declaration: Joseph Leeman was a young man who had left Louth Grammar School only the previous year in 1816, and who later became a solicitor in Dartford Kent.

The declaration was printed by respected bookseller and stationer Henry Hurton in Mercer Row. He had the bow-windowed shop that was, and still is, on the corner of Pawnshop Passage which was formerly known as Hurton’s Yard.