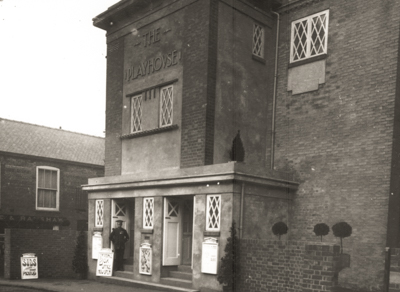 Many people go into this building, but few will recognise this early 20th Century photo. It is Louth’s Playhouse Cinema, located in Cannon Street, not far from the museum.

It was built in the 19th Century as a Congregational chapel. The chapel closed in 1919, and the building became a cinema with its first showing on Boxing Day 1921. Its present art deco frontage was created in 1935.

This photo was taken a few weeks after the cinema opened. Comparison with an earlier photo shows the newly-constructed entrance area that was built onto the front of the original chapel building.

Thanks to Steve in the Playhouse Cinema, and who has astonishing knowledge about its history, we know that the poster is advertising “Suds” starring Mary Pickford. This means that the photo was taken in the week beginning Monday 9th January 1922.

This photo is a print from a glass slide taken by photographer Edward C Woods, from the collection of the late J K Bourne of Louth Manor House.