Louth Railway Station: Past and Present 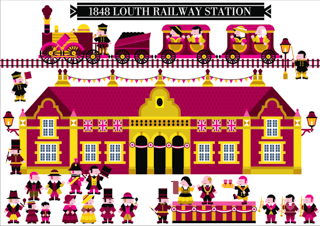 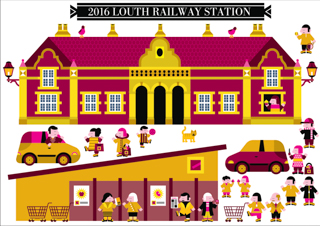 These eye-catching drawings of Louth Railway Station were created by Tommaso, an Italian artist who contacted Louth Museum on the internet and offered his services. They show the station in 1848 and in the present day.
In 1847 the foundation stone of Louth Railway Station was formally laid by Claribel, a talented seventeen-year-old musician who later became nationally renowned for ‘parlour songs’, the Victorian equivalent of modern pop songs. She was the daughter of Louth solicitor Henry Pye, who lived in the large house known as The Cedars in St Mary’s Lane. The first drawing shows Claribel singing one of her ballads outside the station.

After more than 160 years as a great asset to the town, Louth Station closed to passengers in 1970 (although the line northwards to Grimsby remained open for freight until 1980). The original station building has been preserved, and now provides residential accommodation. The second drawing shows Louth Railway Station in 2016, behind the new Aldi supermarket.

The purpose of these pictures is to encourage small children to think about the differences between Victorian Louth and the present day.