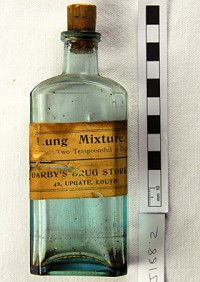 I have chosen to come to Louth Museum for my work experience, which is taking place this week. As one of my tasks I was asked to choose any exhibit from the museum and write about it.

Some of my favourite exhibits in the museum are the medicine bottles. I like them because they give us a good idea of what medicine may have been like in the 1800s and 1900s. We can see that medicine such as ‘Lung Mixture’ is being used, this may be because there were lots of coal mines open in the late 20th century so lots of people may have suffered from poor breathing. We had no mines near Louth but we did have other things such as brick works and fires which produce smoke.

I like the medicine bottles because they also show improvement in glass and metal work from other eras. Metal work improved for the first time in the Ancient Egyptian period of time, this improved medicine and surgery for the Ancient Egyptians because better metal work meant better tools. They were able to write down information on a type of paper called papyrus so that we had written records from this era. The bottles in Louth Museum have a nice curved shape compared to what they used to be like: sharp and dangerous.