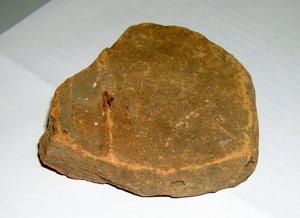 While sorting through items in the Mansion House in Upgate, we came across this piece of fired clay. David Robinson had no hesitation in informing us that it is part of a Roman roof tile.

A Roman roof had two types of overlapping tile.  Flatish tiles with raised edges “tegula” and curved “imbrex” which covered the joints.  Our piece is part of a tegula.

When the Romans came to Britain, they brought their art of tile-making with them, and Roman tiles are common finds in archaeological sites.  In the later Roman Empire each tegula had a raised border on the two long sides, to channel rainwater, rather than allowing it to seep between tiles.  Imbrices and tegulae are still in use in Rome.