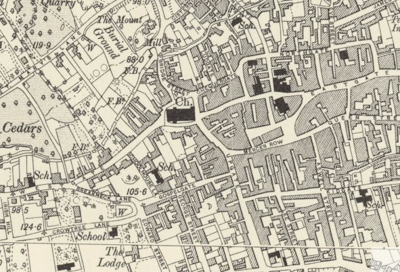 While sorting through documents from Louth Mansion House I came across a photocopy of an old article about street names. Almost 700 years ago in 1317 a deed listed gifts given by the Canon of Lincoln Cathedral to selected people in Louth. Some places where the recipients lived are recognisable today: Market Place, Walkergate, Westgait, Gospelgait, Gospel-lane, Estgate, and Pade-Hole. Walkergate became Queen Street at the time of Queen Victoria’s golden jubilee in 1887. Pade Hole is now Northgate; it was also sometimes known as Finkle Street. On the southern side of Gospelgate were pools - Goose Pools.

But some names are a mystery: Gredles, Toggemilne, Gayskholme, Sayntenmar’landes, Weselbusk, Ffoulmare, Langmare, Hargarth, Peslandes and Pakewang. I wonder where these were. Clues may be that a holme was a small island in a river or a low-lying piece of ground, mare meant a flat area of land, a garth was a yard or garden, and a wang (or more usually wong) was a small field.

Even though we don’t recognise all the names, I think it is wonderful that many of our street names have been in use for at least 700 years. What a magnificent cultural heritage we have in Louth!