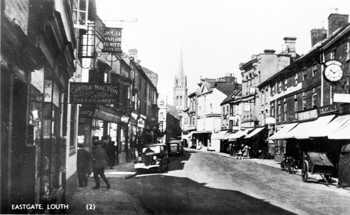 Eastgate in the mid 20th Century

In a student essay written in 1942, Wilfrid Pridmore wrote:

At the beginning of the war Louth was a reception area for evacuation from Leeds. My personal impression was that evacuation was not a success. In this district the evacuees came from the slums of Leeds for the most part. The difficultly was the divergence of habits (mental and physical) between the industrial working-class mothers and the small-town middle-class families with whom they were mostly billeted.  It was the evacuated mothers with children, not the unaccompanied children who were the greatest problem.  The results of this disharmony were painful to both parties, and the evacuation scheme broke down because the mothers returned home.

The experience was not all loss insofar as it showed one part of the community how the other lived.  Considerable sums in compensation were claimed by those whose homes had been damaged taking in evacuees, for damaged furniture, ruined mattresses, etc.

A significant point about the evacuation scheme is that it took place under the impelling pressure of supposed imminent bombing, but when the danger failed to materialise the families that received the evacuees ceased to be sufficiently motivated to overcome the friction which inevitably arose.  Evacuation from bombed places would probably have been a different matter.