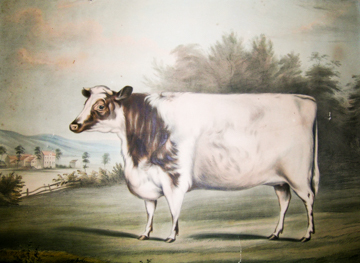 Flower was a national celebrity.  She was a roan shorthorn heifer, born in 1843 at Stenigot about six miles southwest of Louth.  She became an icon in 1844 when she won first prize in the North Lincolnshire Agricultural Show, open to all England.  The results of the show at Horncastle were reported in the Lincolnshire Chronicle on 2nd August 1844: “To the owner of the best one-year-old heifer £5 to Thomas Moses, Stenigot.  Flower, 1 year 4 months”.

Flower at this age weighed 80 stone 2 pounds or 510 kg, and Louth artist Bennett Hubbard painted her.  The painting is convincing, with details of the animal’s anatomy, and the background landscape.  However, her legs and head seem abnormally small in relation to her huge body, and I can’t help feeling that Flower’s proportions have been exaggerated in line with the owner’s pride in having the largest heifer in England.

Flower continued to win prizes in subsequent agricultural shows, until Mr Moses sold her for 57 guineas in 1846.