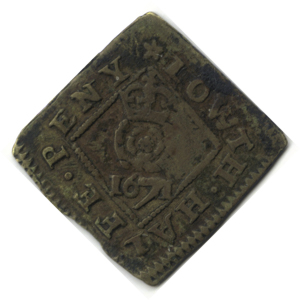 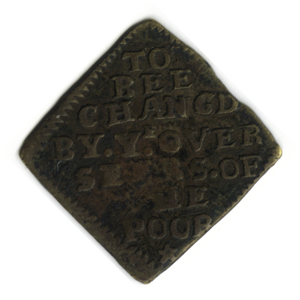 The museum is fortunate to have been given an unusual diamond-shaped copper-alloy token bearing a rose and crown, and stamped “LOWTH HALFE PENY 1671” and “TO BEE CHANGD BY YE OVERSEERS OF THE POOR”.

Why was Louth minting tokens with monetary value?  The official small coinage of England from Saxon times was of silver.  Over the centuries the increased value of silver meant that the size of silver coins had decreased until in the 17th Century the lower denominations were inconveniently small and easily lost.  Some copper farthings had been produced under King James I and Charles I but not enough, and more coins of a useful size and weight were needed for everyday monetary transactions.

Towards the end of the reign of Charles I and during the Commonwealth Period of 1649-1660 monetary tokens were minted and dispensed by tradesmen and officials in many towns. Tokens formed “money of necessity”, and were extremely useful to the community. This continued until 1672 when King Charles II issued regal copper coinage and forbade any usage of tokens.

Our token was one of a batch issued in 1671 by the Overseers of the Poor in Louth and noted in the archives of St James’ Church.  The Overseers kept records of the poor persons of the town, collected compulsory contributions from the townspeople, and used the money to feed the needy and to apprentice the children of the poor.  These tokens would have been used by the recipients to purchase items from local traders, and eventually would have been returned to the church in payment of parish rates and contributions.

We are very grateful to Mr Kenneth Harvey for donating this interesting coin to Louth Museum.