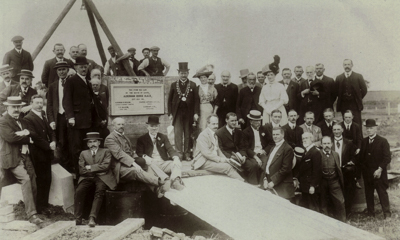 The official opening of the sewage works

This photo by Arthur James of Ramsgate shows a group of people around a foundation stone. Examination of the inscription on the stone and searching in contemporary newspapers revealed that this was the opening of Louth sewage works on Thursday 20th July 1911.

“Members of the Corporation were conveyed to the works, which comprise an outfall sewer and sewers by which the existing sewers connecting with the River Lud will be intercepted and conveyed down the valley of the Lud for a distance of about a mile and a half beyond the borough boundary. From detritus tanks, in which the more soiled matter will be interrupted, the sewage will pass into continuous flow tanks … and afterwards is subject to the action of nitrifying organisms in six filter beds.

“The mayor [George Blaze] was presented with a silver trowel and mallet by Mr Latham [elderly civil engineer based in London] and the party was afterwards entertained by the mayor to luncheon in the Town Hall.”

Unfortunately, there were numerous reports in subsequent years of the disappointing performance of the sewage works, with disputes between the Council, the Contractors and the Engineers. And in 1929 it was reported that “The system which is in operation has been far from satisfactory, but the heavy debt that remains on work has made the Public Health Committee very chary of embarking on the expensive scheme which is necessary to put things right.”

We thank David Robinson for donating this item to the Museum.