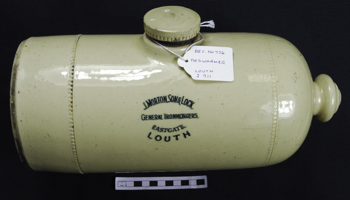 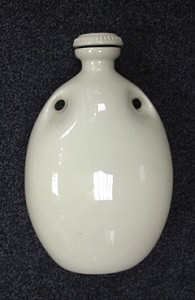 Before the days of electric blankets and central heating, the only way of warming your bed on cold winter nights was to put something hot into it.

Early bed warmers varied according to economic status. Rich households had a flat brass pan with a long handle, a “warming pan”, which was filled with embers from the fire and then put in the bed to warm it. The poor on the other hand might heat a brick in the fire, then cover it with a cloth and put it in the bed.

The hot water bottle came into use during Victorian times – it was simply a robust heat-resistant bottle which was filled with hot water, and had a watertight seal. Ceramic bottles were the most common type until rubber bottles were invented.

The illustrations show an early 20th Century stoneware hot water bottle bearing the inscription of Morton, Son & Lock of Eastgate Louth, and an elegant white porcelain hot water bottle used in Louth Hospital in the mid-20th Century. We are grateful to Peter Kerman for recently donating the hospital bottle.