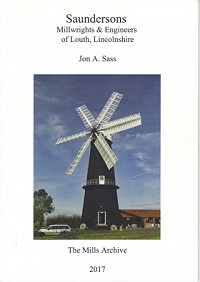 Are you interested in windmills? If so, you MUST get the recent book by Jon Sass, a copy of which he kindly presented to the museum. Entitled "Saundersons, Millwrights & Engineers of Louth, Lincolnshire", if focuses on three generations of engineers, each called John Saunderson or Sanderson (born 1789, 1819 and 1858 respectively) who had their works at various locations in Louth; the largest can be seen on the 1840s Louth Panorama located in Charles Street, at what is now the southern end of Hawthorne Avenue.

As Richard Gurnham said in his panorama stories, it was largely owing to the work of men like the Saundersons that multi-sail tall brick tower windmills were widely adopted across Lincolnshire. The millwrights of the early 19th Century had to be masters of many skills, from carpentry and smithing to gearing wheels with wooden cogs and dressing millstones. One technological improvement was the fan tail which moved the cap of the windmill automatically when the wind changed direction, so that the sails always faced into the wind. Another was an automatic device to reduce the dangerous effects of very strong winds.

Jon has vast knowledge about windmills, and this book is a great read.