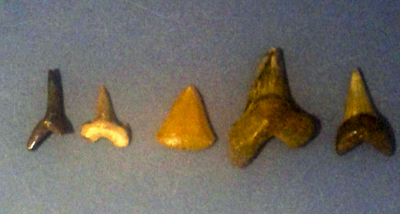 For my work experience I have chosen to spend the majority of this week working at Louth Museum. As well as other tasks, one thing that I have been asked to do is choose an item or collection at the museum and write about it.

One that immediately caught my eye was the fossilized shark teeth in the fossil exhibit. I chose these items because I have always took a massive interest in fossils and the prehistoric era. These also give us an idea of what the past was like and what creatures were like millions of years ago and how time has taken its toll on the teeth. I reckon these came from the Jurassic era because at that time, the ocean was at a much higher level and more land was more submerged in water and what ever lived in it was able to get to Louth. This is probably how the sharks got here in the first place and over time, their bodies rotted away and all that was left were the teeth.

I believe I can identify the sharks that died from the shape, colouring and features on the teeth. Two of them are black in colour and are quite large, about the size of your fingers. Two are a bit smaller and a lot thinner, probably used for gripping and biting instead of cutting. And the last is light brown and is very serrated and was used for cutting. The two I have rounded down to are the mako shark and the great white shark. The two teeth on the left could be mako shark teeth as they have small and quite narrow teeth, but could be smaller teeth of a great white shark. The two on the right could be from a great white as they have very large and wide teeth. And the tooth in the middle is very serrated which could belong to a great white or any other shark which needs to tear up large prey. Both these sharks have thin teeth and have serrated teeth and could have landed here because of the warmer climates back then and the fact Louth is quite close to the coast. Now however the climate is much colder (but heating up) and Louth is now no longer submerged in water.