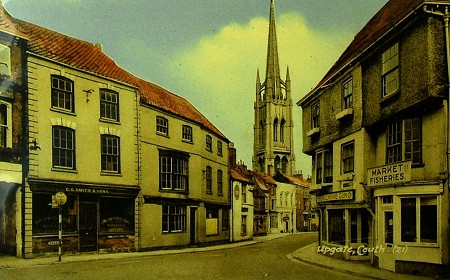 A recent query from the USA regarding Louth soap maker William Chatterton made us look in more detail at the soap making industry in Louth.

In the late 18th Century the soap works in Church Close off Gospelgate were owned by William Chatterton. The buildings are shown on the 1840s panorama drawings by William Brown. The soap warehouse is indicated in red and the soap factory in blue. The yard is labelled “Hyde’s Yard”. This is because in 1792 William Chatterton’s daughter Sarah married William Hyde who took over the soap works and established a grocery business on Upgate. William Hyde was a successful businessman and by the 1820s lived in a large house close to his Riverhead warehouse, which later became ‘The Lincolnshire Poacher’.

From the 1850s the soap and grocery business were run by the Smith family, and older residents of Louth will recognise the name C G Smith.