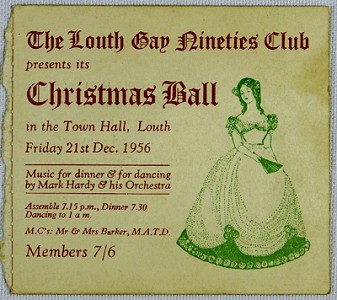 Looking at this 1956 invitation in the museum, I realise how much the usage of certain words has changed in the last 50 years.

The Gay Nineties was a nostalgic term referring to the decade of the 1890s. According to Wikipedia, the term Gay Nineties began to be used in the 1920s in the USA when the decade was nostalgically seen as a period of pre-income tax wealth for a newly emergent "society set". It was also the name of a nostalgic radio program in the 1930s.

Gay meaning ‘homosexual’ became established in the 1960s as the term preferred by homosexual men to describe themselves, and is now the standard accepted term throughout the English-speaking world. As a result, the centuries-old other senses of gay meaning either ‘carefree’ or ‘bright and showy’ have more or less dropped out of natural use.