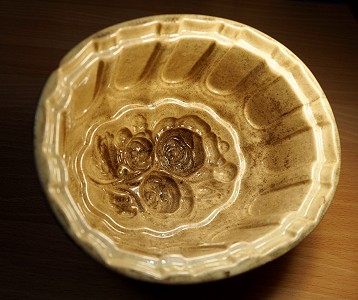 This Victorian ceramic mould with a design of roses would have been used to make jelly or flummery. Many thanks to Derek Smith for taking this excellent photo.

Flummery was a cold pudding, popular in Britain from the seventeenth to nineteenth centuries. It was originally a starch-based pudding made by soaking oatmeal in water, boiling the strained liquid with sugar and flavouring such as rosewater, and allowing it to set in a mould. The pudding would be turned out onto a platter, and served with cream or honey.

The term flummery also came to include semi-set desserts such as fruit custard or blancmange thickened with cornflour, various dishes made of flour, milk, eggs and sugar, and jellies that contained gelatine from calves’ feet as the setting agent. In Australia, after World War II, flummery was the name used specifically for a mousse dessert made by whisking evaporated milk, sugar and gelatine, which became established as an inexpensive alternative to traditional cream-based mousse.

The origin of the word is obscure, but as 'flummery' also means 'complete nonsense', the name of the pudding may have arisen from the custom of giving end-of-meal desserts some sort of comic title to indicate 'unimportant or trivial thing', as is the probable derivation of 'flan', 'trifle' and 'fool'.