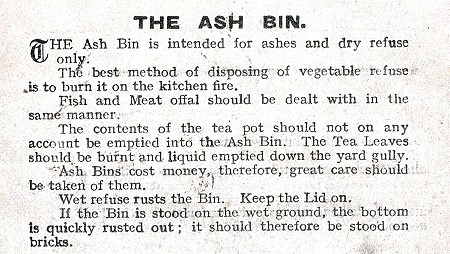 Instructions in the rent book

We have recently been given a rent book for a small house in Union Street, Louth, covering the years 1939 to 1945. The rent was five shillings (25p) per week. The “Notes for Tenants” at the back of the book caught my eye. Along with instructions about drains, coppers (for heating water) and not tarring the walls are rules about what to put in the bin.

Today we receive a lot of messages about what we should and should not put in our waste bins. In 1939, the principal material to go in the bin was ash from the fire, and that’s why it was called the “Ash Bin”. Every house would have had at least one open fire, producing substantial quantities of ash.

In 1939 there was no mention of plastic waste, and perhaps surprisingly none of paper and cardboard, which would everyone would have known was valuable fuel for the fire. Other waste to be burnt was vegetable refuse, fish and meat offal, and tea leaves.

We forget that bins were made of metal and had to be kept dry to prevent rust. Householders were urged not to put wet tea leaves in the bin, to keep the lid on the bin to exclude rainwater, and to raise the bin on bricks so it didn’t stand on wet ground.