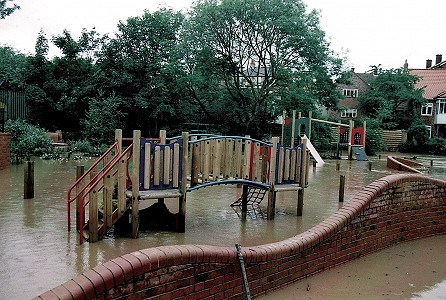 The horrendous flood in May 1920 resulted in 23 deaths in Louth. This flood is commemorated by a permanent display in Louth Museum.

A collection of photos donated by the late David Robinson reminds us of the Louth flood in 2007, only eleven years ago. Heavy rainfall in the last week of June 2007 led to the River Lud bursting its banks. This photo of the children’s playground in Spout Yard shows just how dramatic it was. Many homes were flooded, leading to misery and problems that lasted for months.

The Flood Alleviation Scheme in Louth, which was led by the Environment Agency and cost £6.5 million, was formally opened in July 2017. Its aim is to protect residents from flooding. Large scale-flooding in Louth is one of those sights I hope never to see again.