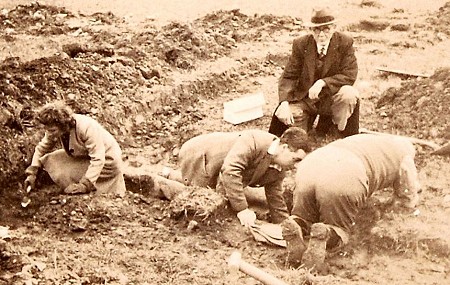 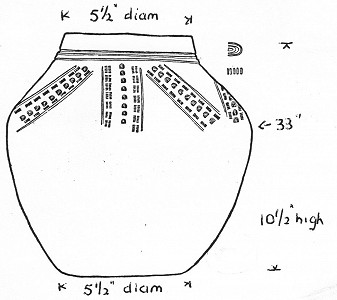 In light of the recent exhibition on the Anglo-Saxon site excavated at Little Carlton, those whose interest has been piqued and wish to dig a little deeper may be interested to hear about another important local excavation. In 1946, over 200 Anglo-Saxon cremation urns along with some items of Romano-British pottery were found at Acthorpe Top in South Elkington. Seven of the urns discovered here are can be seen in the Ludalinks Gallery at the Museum, and when combined with the evidence from the Little Carlton site, we can observe the material manifestation of one of the most important processes in the history of the Western world – England’s conversion to Christianity.

Acclaimed Oxford archaeologist John Nowell Linton Myres noted the unusual abundance of urns at Acthorpe Top, calling it one of four key British sites, which between them give us many times over the total of urns from all other Anglo-Saxon burial grounds put together. All the urns at South Elkington contained burnt bones, flints, pebbles, and some grave goods. In contrast, the “cemetery” area of the Little Carlton settlement housed 30 burials, with bodily remains orientated in a West to East direction. Radio-carbon dating places these burials between AD 650 – 710, whilst analysis of the patterning of the urns at South Elkington dates them somewhere between AD 400 – 600. What can we interpret from these differences in burial methods? The bulk of all archaeological evidence from the Anglo-Saxon age is funerary, which is handy as we therefore know how these objects came to be in the ground – they were intentionally put there. But this presents an interpretation bias of its own, and how much can we infer about a people by how they buried their dead?

Unlike the people of Little Carlton, with their unusually high levels of literacy suggesting their importance as a royal, administrative or religious site, the evidence from the South Elkington-ians indicates a simple people (for more on this, see Chapter 4 of Richard Gurnham’s book, "The Story of Early Louth"). Among the urns found, there was no sign of even a rudimentary ceramic industry - each urn appears to have been made by an individual hand. The few Saxon-style stamped wares present are probably due to Saxon elements in the original group of immigrants and the influence of limited 6th century trade, rather than a sign of any contemporary migration of other peoples. There are few goods of any great quality, but the presence of grave goods at all, such as the glass beads found in Urn 71 (housed at the Museum), and stem of a clay pipe in Urn 30, is an important indication – it defines these people as pagan, or at least following pagan traditions. The objects are all badly burnt or melted, suggesting that the bodies were cremated wearing their clothing and ornaments, confirming their pagan origin.

Yet, in AD 597, St Augustine’s mission from Rome under the auspices of Pope Gregory I started the process of conversion to Christianity. As more and more leaders of the various Anglo-Saxon kingdoms converted (Christianity offered the assistance of a divine power, with promises of earthly victory, redemption and a paradisiac afterlife) the practice of placing goods in graves ranged from becoming unfashionable to being outlawed. In many places, pagan shrines were destroyed, their stones used in the building of new Christian churches. Archaeological evidence from across the country indicates a 7th century phase of transition, between the occupations dates of our two Lincolnshire settlements. Pagan-style burials - cremated whilst clothed, with grave goods, and remains placed in urns buried outside of the main settlement - gave way to the graveyards of new local churches, burials in a west to east orientation, without particular dress or goods.

However, it seems not everyone was convinced by the new religion. At some sites across the country, there is interesting evidence of a combination of practices. At Finglesham (East Kent, first excavated in 1989), a west-east orientation of burials has been found in a pagan burial place. At Sutton Hoo, the great pagan ship-burial, most likely of King Raedwald of East Anglia, contained silver baptismal spoons, seemingly confirming Bede’s statement that Raedwald syncretised Christian practices into his pagan beliefs. There is also evidence of increased superstitious behaviour regarding the dead in this period, with higher incidences of decapitation and stoning of corpses. Richer graves were more likely to contain Christian amulets, which indicates conversion took place first and more quickly among the upper echelons of Anglo-Saxon society. Meanwhile, it seems everyday people doubted the power of Christianity over the potentially unquiet dead, denied their pagan rites. Kings may have made their conversions, but some of the buriers evidently weren’t quite convinced, and nudged a pagan amulet or two into the graves when no-one was looking! They seemed to need the double insurance of protection from the old gods and new.

Nevertheless, as we know today, Christianity won out. Its late 7th – early 8th century victory can be seen in the burial style at the Little Carlton site. Here we have not only totally Christian characteristics, but the site also seems to have had particular religious significance. We can therefore see, from the comparison of just these two excavations, that the Lincolnshire evidence tells a story on its own, as a part of this vast socio-political change. So, don’t underestimate those plain looking pots beneath your feet in the Ludalinks Gallery, and if you didn’t catch the Little Carlton exhibition at Louth, some of the items will now be displayed at St John the Baptist Church in Great Carlton. See for yourself these great local finds, that hold such significance in the archaeology of Christian conversion!