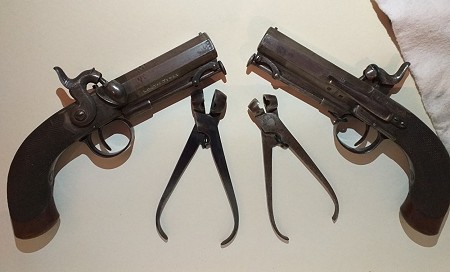 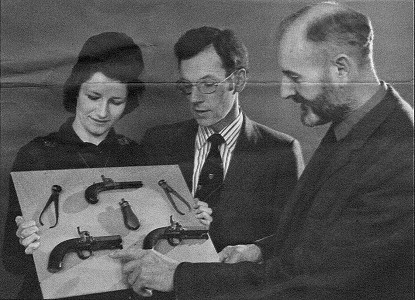 We have recently been given some images and documents relating to the Lincolnshire Gun Company which was located in “Cromwell’s House”, now the Helal Tandoori Restaurant at the junction of Upgate and Mercer Row. This building is reputed to be one of the three oldest buildings in Louth – the others being the White Swan Inn and the Wheatsheaf Inn. Among the items given to us are indentures dating back as far as 1729.

My eye was caught by a relatively recent, 1976, newspaper cutting about three nineteenth century pistols that had been found in the Midland Bank in the Cornmarket, now HSBC. The predecessor of the Midland Bank was the Lincoln & Lindsey Bank, founded in 1833, and the pistols which date from this era were presumably used by the bank guards. In the twentieth century the pistols were on display in the Midland Bank for many years, and in June 1975 they were sent to and returned from the Head Office of Midland Bank. Subsequently, according to the newspaper report, they “were taken to the Lincolnshire Gun Company where Mr Frederick W O Read the proprietor, took the pistols from the case and found to his astonishment that all three pistols were loaded with powder and ball and had been for over 100 years.” The picture shows Frederick Read (right) with two of the bank staff, Rosemary Drinkel and Peter Wright.

The pistols are now on display in the Panorama Gallery of Louth Museum, and needless to say, they are no longer loaded!