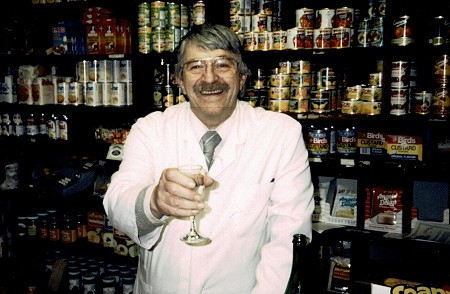 Keith in the shop

We have recently been given this photo of Keith Fytche behind the counter in Larders grocery shop. Many residents of Louth will remember Keith, who for several years ran this well-known delicatessen and grocery. In 1983 Keith took over Larders in Mercer Row from Harold Larder. The popular shop moved to Little Butcher Lane in 1988, Keith retired from the business in 2003, and he sadly died in 2006.

Keith who was born in Louth in 1927 worked as an architect after returning from the army in 1948, and had his own practice in New Street. He was a long-serving member of Louth Playgoers and he designed and built the Playgoers theatre in Newmarket. He also built his home in Stewton Lane.

Several generations of Keith’s ancestors had lived in Louth. His parents had a grocery shop in Charles Street. In the 1870s his great-great grandparents William and Jane Fytche ran the Raven Inn on Eastfield Road at the boundary with Louth Park. This inn, which is now a private house, catered largely for workers and sailors on the nearby Louth canal.