Edwin Whitworth and the self-binding reaper 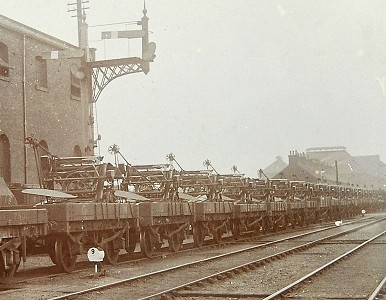 The recent talk given to the Ants and Nats by Jean Howard on the topic of "Lesser known Lincolnshire poets" included Laura Annie Whitworth, also known as Laura Dudding. Laura lived in Theddlethorpe with her husband Edwin Whitworth – he was an agricultural engineer who deserves more recognition.

A newspaper report in October 1881 tells us about the significant developments made by Edwin Whitworth:
"This patent self-binding reaper has been working on different farms in the neighbourhood, and has given general satisfaction. The Binder is now looked upon as a decided and important success of mechanical skill, and there is no doubt that the machine will be extensively purchased by farmers for next harvest."

"On Wednesday the machine cut and bound a good crop of barley belonging to Mr W B Pearson. The quantity to be cut was four acres, which the machine accomplished in less than four hours, to the entire satisfaction of Mr Pearson. The cutting and binding were all that could be desired; the knot is a perfect one, and the sheaves were large and bound in the middle – not too tight – the delivery of them being excellent. Another good feature in this machine is that it leaves no loose grain on the ground."

Edwin Whitworth trained in Manchester, the home city of engineer Sir Joseph Whitworth, who devised the British Standard Whitworth system for screw threads.  Despite some reports that Sir Joseph was Edwin's uncle, it appears that they were unrelated.