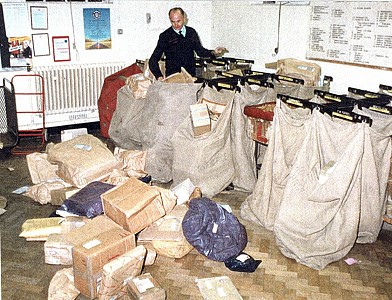 In Louth Museum we have thousands of photos. One of the more unusual is this photo of Louth Sorting office during the pre-Christmas rush in December 1992. The photo was taken by postman Tim Broughton, and kindly donated to the museum by the late Harold Jackson.

Did you know that Louth’s first Post Office was established in 1822 on the corner of Eastgate and Vickers Lane, where the shop ‘Heron’ is now? This was in the era before pre-paid postage stamps were introduced in 1840. In the 1880s the Post Office moved to the Market Place, and then in 1929 to Little Eastgate. Now, of course, the Post Office operates from Northgate, opposite Vickers Lane, with the Royal Mail Delivery Office remaining in Little Eastgate.