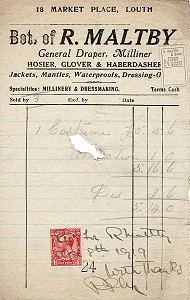 Do you sometimes wonder what people were doing a hundred years ago? In 1919, Mrs Speed treated herself to a new outfit from the draper in Louth. We know this because she kept the receipt, and it is now in Louth Museum.

Mrs Florence Speed was a 41-year-old farmer's wife who lived in Carlton. The price of her costume was £5 14s 0d, a considerable sum in those days - in today's money it would be about £300. She made the purchase in the drapers 'R Maltby & Sons' which was located on the eastern side of Louth Cornmarket, and is now the health food shop 'Holland & Barrett'.

The 1919 receipt was handwritten on a printed form. It has a ragged hole in the middle indicating that it was filed on a metal spike. When the invoice was paid, a penny postage stamp (bearing the head of King George V) was added, and payment acknowledged with a signature. A much more laborious system than the speedy computerised tills and card payments in use today!

The requirement to put a postage stamp on receipts was a form of sales tax, which continued until abolished by the 1964 Finance Act; the modern equivalent is VAT. Stamp Duty still exists in the form of a